The National Irish Famine Way is Ireland’s newest accredited national heritage trail that runs approximately 165 km from Strokestown, Roscommon, to Dublin, Ireland. The National Famine Way is a project that I’m honoured to have participated in over the past year.

The story starts at the height of the famine in 1847 (Black ’47) when 1,490 Irish tenants of Strokestown Park Estate including men, women and children walked six days from Strokestown to Dublin as part of an assisted emigration scheme to Canada. The National Famine Way project aims to uncover the stories of the missing 1,490 who boarded ships in Dublin which stopped in Liverpool, UK and then went on to Canada. They were known as the “coffin ships” as nearly half or more of the passengers on each ship would parish on the journey.

No food, no shoes, no home: The exodus

Many people who are aware of the Great Irish Famine or who may have studied it in school or university, as I did at the University of Alberta during my undergraduate degree, know that Ireland suffered from the potato blight that killed the precious crop. What I didn’t know until I visited the National Famine Museum was that the potato blight severely affected many European countries, but several factors led to the great hunger and losses in Ireland. The average Irish person in the 1840s was eating 14 pounds of potatoes per day as the main staple diet! 14 pounds! Today people worry about gaining weight from eating one pound of potatoes (or french fries if we’re being honest). Potatoes are rich in nutrients and kept the Irish healthy enough to do daily agricultural manual labour for their landlords. In 1841 Ireland had a population of 8,175,124 people and just 40 years later (1881) the population fell by 3 million to 5,174,836 (census).

What moved me during my visit to the National Famine Museum in Strokestown were the images of the conditions the Irish people lived through during the famine. The photos, paintings and sketches show families, some with six to eight children, living in small, one-room huts with one bed made of straw and the cow also inside to keep the family and the animal warmer and safe. The clothes they wear look more like rags because they are worn out and falling apart. Women and children didn’t have shoes! The history of shoes does back to antiquity but in Ireland, they were in such dire times that they were barefoot and used metal foot braces to protect their feet when digging/farming the land.

Before the 1,490 people embarked on the long walk to Dublin, their homes (cottages) were burned to the ground to prevent them from wanting or trying to come back home. They had no food, no shoes and no home.

Retracing the journeys and lives of the Strokestown Estate tenants is a long project and more information is being uncovered about the families and their decedents. Those interested in learning about those who partook in the long 6-day walk across Ireland during times of starvation can start through any of the many entry points into this transmedia story.

Recognised by Jim Callery as a significant place of Irish history, and maintained by his philanthropy for 35 years, Mr Callery was awarded the EU Prize for Cultural Heritage (Europa Nostra Award) in 2017. His daughter Caroilin Callery is a heavily involved and strong project leader for the National Famine Way. The Georgian Palladian Mansion is open for guided tours to view the original furnishings and even photos and other artefacts from the house’s occupants. The Famine Museum gives an overview of Irish life during the 1800’s, the impacts of the potato blight, the political situation and the impacts on the Irish population of over 8 million. The Park and Museum are now maintained by in partnership with the Irish Heritage Trust and the Westward Group.

The National Famine way follows the Royal Canal 165 km from Strokestown to Dublin quays and takes approximately 6 days. The Way can be walked or cycled in sections or the complete walk. The National Famine Walk takes place every two years where members of the project team and other walkers from Ireland, Canada and the United States walk along the Royal Canal in the footsteps of the 1,490. The walk begins with a Canadian Wake in Strokestown the night before the journey begins to say goodbye to the walkers, many of whom perished in 1847.

If you enable GPS or location-based services on your phone, you can stop at each pair of bronze shoes to read about the 1,490 and the Tighe family story as told through the perspective of 12-year old Daniel Tighe and written by Marita Conlon-McKenna.

The long-term goal is for this location-based story to be developed into a mobile application. I conducted a study of 55 heritage trail mobile applications to better understand the current genre conventions of heritage trails apps. I also contributed to discussions on how to design the digital narrative for the National Famine Way website. The narrative is centred around the 31 bronze shoes monuments along the Royal Canal, which were cast from a real pair of children’s shoes from the famine-era. As the stories of the 1,490 are still missing and being pieced together by the project team, Marita’s beautifully-written historical fiction bridges the gaps and gives walkers an idea of what it may have been like for the families required to emigrate.

At the end of the 6-days this year on May 30, 2019, the famine walkers arrived in Dublin. The launch event for the National Famine Way took place at the EPIC Museum, which was recently voted Europe’s leading tourist attraction of the year! One of my PhD supervisors, Owen Conlan, spoke at the event about the ADAPT Centre’s role in helping create the digital stories for the National Famine Way. Musician, Declan O’Rourke played at the launch event with a few songs from his album “Chronicles of the Great Irish Famine” which was inspired by the book “The Workhouses of Ireland” by John O’Connor.

On the other side of the Atlantic, where famine survivors would have landed on the coffin ships, are strong ties to the Irish famine story. Located in Quinnipiac University in Hamden, Connecticut (USA), is “Ireland’s Great Hunger Museum” which houses a collection of artwork that explores the loss of life, leeching of the land and the implications for the Irish language and culture. Professor Christine Kinealy, Director of “Ireland’s Great Hunger Institute” in Quinnipiac University, has organised a sister walk to the Irish National Famine Way and she hopes that it will become an annual event.

The Trail of Tears – Oklahoma, USA

On March 23, 1847 (just two months before the 1,490 left Strokestown), a group of Choctaw leaders met in eastern Oklahoma to raise funds for the starving poor in Ireland and they gifted ($170 USD at the time, equivalent to thousands today) the Irish Relief Committees in the USA to be sent on to Ireland (Smithsonian Mag, 2018). I met LeAnne Howe, a member of the Choctaw Nation, poet and co-editor with Irish scholar Padraig Kirwan of the forthcoming book “Famine Pots: The Choctaw Irish Gift Exchange 1847-2017″, shared the story of her family and her people. The Trail of Tears is 1,600 kms (900+ miles) that the Choctaws walked when they were forcibly removed from their lands by the American government in 1831. Many died on the walk due to hunger, cold and disease (BBC, 2017). The Choctaws felt empathetic for the Irish who experienced similar pain and wanted to help them.

In the summer of 1847, Toronto received 38,560 Famine migrants from Ireland when the city’s population was only 20,000 people (Irelandparkfoundation, 2019). The stories of those of the 1,490 from Strokestown who survived the journey by ship continued in Upper Canada. Professor Mark McGowan, University of Toronto, has used historical records and enlisted the help of a team of undergraduate researchers and genealogists to discover what happened to the survivors of the 1,490 group. He notes that nearly 50% of the 1,490 died on the way to Quebec or in the holding station on Grosse Ile. Many of the survivors ended up in Niagara and some had happier endings than others.

So if you’re planning a cultural holiday, why not partake in one of the Irish Famine walks and visit one or more of the famine museums?

This transmedia story traverses the seas to to the UK, Canada and the United States. From books, songs, to museums, monuments (bronze shoes along the National Famine Way) and websites you can immerse yourself in the Irish famine stories. Whether you’re a local going for a shorter walk, tracing your heritage, or a tourist in Ireland, there is much to be gained from these stories. The stories of the 1,490 are only one group affected by the greater Irish Famine. 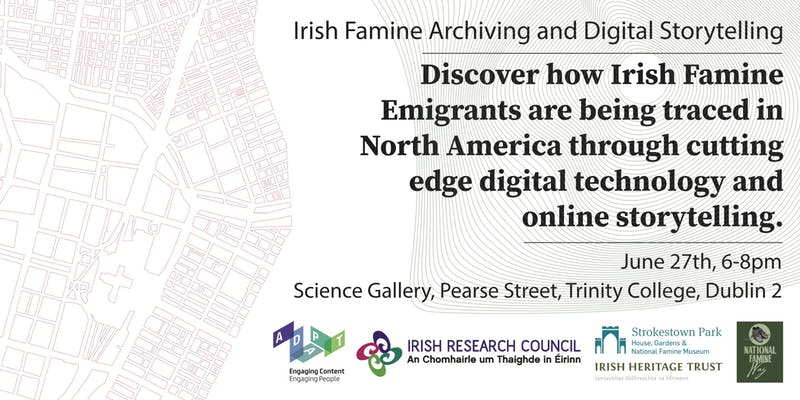